We Are Proud To Present

A presentation about the Herero of Namibia, formerly known as South West Africa, from the German Sudwestafrika, between the years 1884 – 1915

A multiracial cast of six idealistic actors sets out to improvise a story about the first colonial genocide of the 20th Century in Africa, but get lost in the reality of their undertaking. The unusual presentation, humor and inevitable discomfort of this provocative new play gripped theatre hubs like New York, Chicago, London, Washington D.C. and Seattle with its unique theatrical investigation of prejudice, power and perspective.

This play uses irony, satire, racially charged language and symbolic violence to examine power, racism and perspective. We recommend this play for patrons 16 and older.

How can you take action and get involved in our community?

What Does It Mean To Be White? Developing White Racial Literacy by Robin DiAngelo PhD
MORE HERE

Learn more about We Are Proud to Present…

An ArtsEmerson interview with playwright Jackie Sibblies Drury HERE.
Download the study guide for this production HERE. A great resource for all!

Oregon Public Broadcasting “State of Wonder”
by Aaron Scott with Kimberly Howard
LISTEN to this story, click the soundcloud link.

“We Are Proud to Present… is a belly laugh and a gut punch.”

“This is why we need theatre.”

“…brings all of the feelings and conflicts surrounding race front and center. It makes them inescapable in a way that I think only live theatre can. It’s hard to ignore something when it’s right in front of you…”

“You should absolutely see it.”

“…a play that takes on decades of systemic violence and racism from an elliptical, almost painfully intelligent script by Jackie Sibblies Drury, and with direction from Kevin Jones, who translates Drury’s controlled chaos to the stage with precision and pathos.”

“A punch in the face hurts for an instant, but it’s easily dismissed. The same cannot be said of palpable discomfort that seems novel, until you realize it’s the thing that’s always there, unnamed and perhaps kept quiet, but nonetheless underlying our collective experience…”

“…We Are Proud to Present is a scorpion of a play, and its tail packs a serious punch…”

“…a catharsis that left me gasping for breath…”

“The genius of We Are Proud to Present a Presentation About the Herero of Namibia, Formerly Known as Southwest Africa, from the German Sudwestafrika, Between the Years 1884-1915 is that it gives its audience a “personal connection” to their conversations about race, and maybe it encourages them to find something new to think and say about it.”

“…you are only experiencing that Reality from your perspective. The true Reality may lie in the combined point of view of the group, or it may not truly ever be found in its entirety.”

“…a riveting conclusion, an unsettling crescendo, in which we seem to be looking at things through a glass darkly, until it rotates and becomes a mirror for us.”

“James Baldwin once said, “Artists are here to disturb the peace.” When you sign on to see this play, be prepared for your peace to be disturbed. It’s well worth it.”

“We can’t know what it was like to be the victims of history, but there is plenty of violence and suffering to be found in our own selves.” 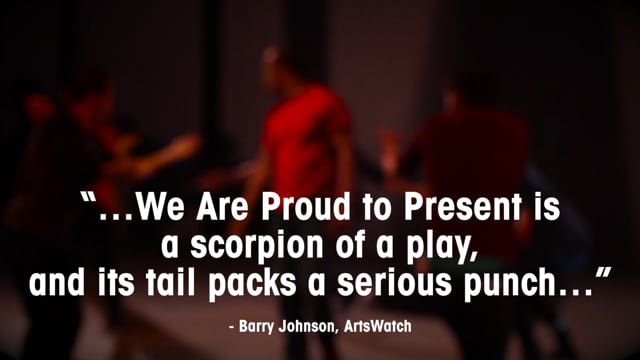