15 years after Norwegian house wife Nora Helmer walked out on Ibsen’s Torvald, she walks back in the front door in the sequel to the 1879 social drama. In the ensuing years of her departure, Nora has become an incendiary writer — which isn’t a profession that married women could perform without permission. Since her husband didn’t sign the divorce papers, Nora has returned to the house she desperately sought to vacate to gain her freedom.

With a quick wit and razor-sharp tongue, A Doll’s House, Part 2 imagines the continuation of the house of Helmer as a deliciously gleeful trek through the complicated waters of relationships.

Education Resources
Prep for A Doll’s House, Part 2 with this book and movie list from the Multnomah County Library.

“A Doll’s House, Part 2 is the best kind of sequel. It adds layers and a more nuanced understanding to the original.”

“Schooler has chosen a well-honed cast and they tear up the stage, all totally convincing in their portrayals” 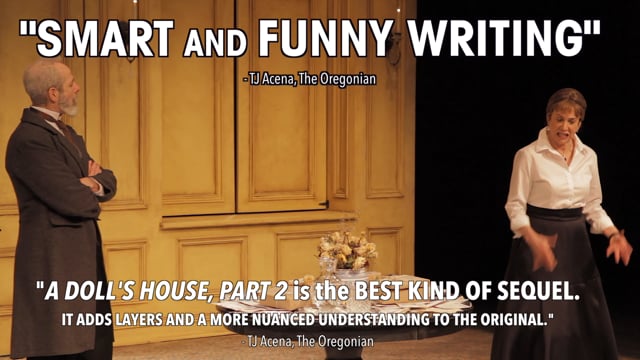