It’s the small dinner party that made big waves on Broadway about a fractured family at its not-so-finest. A bold, bruised, and billowing drama, The Humans layers the fabric of a family’s past as they gather at the youngest daughter and her boyfriend’s New York Chinatown apartment for a holiday meal. As the Blake family poke at old wounds and forcibly stumble through treasured traditions, tensions bubble over, secrets fight their way to the surface, and the world creaks curiously around them.

“There is so much love, dread, tenderness and brutality in The Humans…deeply-felt family tragicomedy thriller…”

“…The Humans powerfully plumbs our daily heartbreaks during one compelling meal with humans that hit very close to home.”

“…it’s the ability to make even the most banal moments so impactful that makes The Humans endlessly fascinating.”

“In the comic drama The Humans at Artists Rep, Thanksgiving dinner with the Blakes just might knock the stuffing out of you…”

“[The] cast, some of them veterans of the company and past shows, fit into their roles like hand to glove, quite a perfect ensemble.”

“It’s an outstanding play, using a holiday dinner to explore many issues that divide us on a family scale as well as a societal one.”

“Thanksgiving traditions juxtaposed in tragi-comic and terrifying accuracy with a world they no longer recognize.”

“I suspect you will see someone you know represented by at least one these characters. Their sheer humanity is that striking.”

“Stephen Karam’s kind, warm, beautifully observed and deeply moving new play [is] a celebration of working-class familial imperfection and affection and a game-changing work for this gifted young playwright.”

“[The play succeeds in] finding gorgeous balance between humor and sadness, love and disappointment, hope and dread, solace and hollow desolation.”

“Drawn in subtle but indelible strokes, Mr. Karam’s play might almost qualify as deep-delving reportage, so clearly does it illuminate the current, tremor-ridden landscape of contemporary America.” 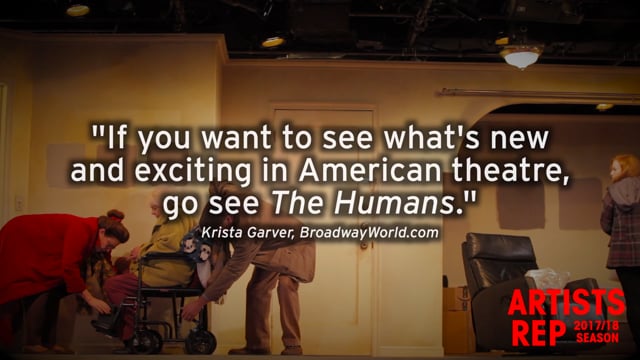