The star of this hilarious and heart-wrenching new comedy is Trevor, a 200-pound chimp intent on reviving his showbiz career. He worked with Morgan Fairchild, for crying out loud! He lives with his human “mom” — just a regular family, trying to get by in spite of neighbors who simply can’t understand. Swinging between reality and fantasy, TREVOR takes aim at the nature of humanity and the lies we tell ourselves.

Read the recent interview we did with playwright, Nick Jones, here.

Learn more about the playwright by visiting his biography here.

For information on Jones’ thoughts about TREVOR and his inspirations, visit here.

Look into TREVOR’s production history through a promo that was produced for the initial 2013 New York City production.

If you are interested in the true events that inspired the story of TREVOR, visit here and here.

Download our Study Guide for this production here. A great resource for all!

“The convergence of funny, well-written material and moving performances from the entire cast under the direction of Dámaso Rodriguez makes for an exciting season opener for Artists Repertory Theatre.”

“…rueful comedy, with a little ping of social conscience underneath… truly splendid and entertaining ensemble…the seriocomic events are pulled off, and under Dámaso Rodriguez’ acute direction…very crisply and juicily…”

“Trevor (superbly sketched by John San Nicolas)…He hovers in that area between ape and human that is so fascinating to watch on stage.”

“TREVOR may be the funniest play I have seen at Artists Rep.”

“…a brilliant combination of satire and reality, at once taut, touching and absurd.”

“…comical and heartfelt”…this play is about us just as much as it’s about non-human animals.”

“Artists Rep’s season kicks off with a play as compassionate as it is unsettling.”

“…Mendelson, as Trevor’s guru, is quite a treat…”

“Plays like SYLVIA and THE BENGAL TIGER AT THE BAGHDAD ZOO have found humor in animals speaking like humans. But in TREVOR, the laughs (and there are many) have an edge.” 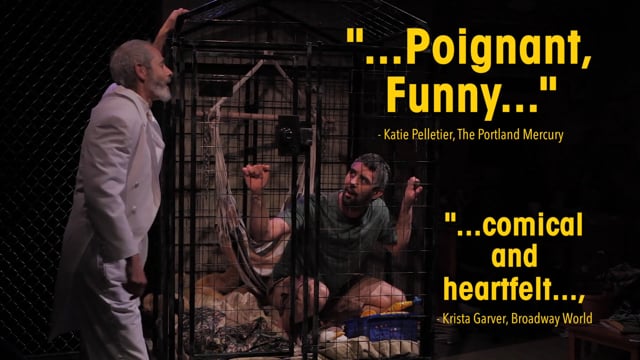